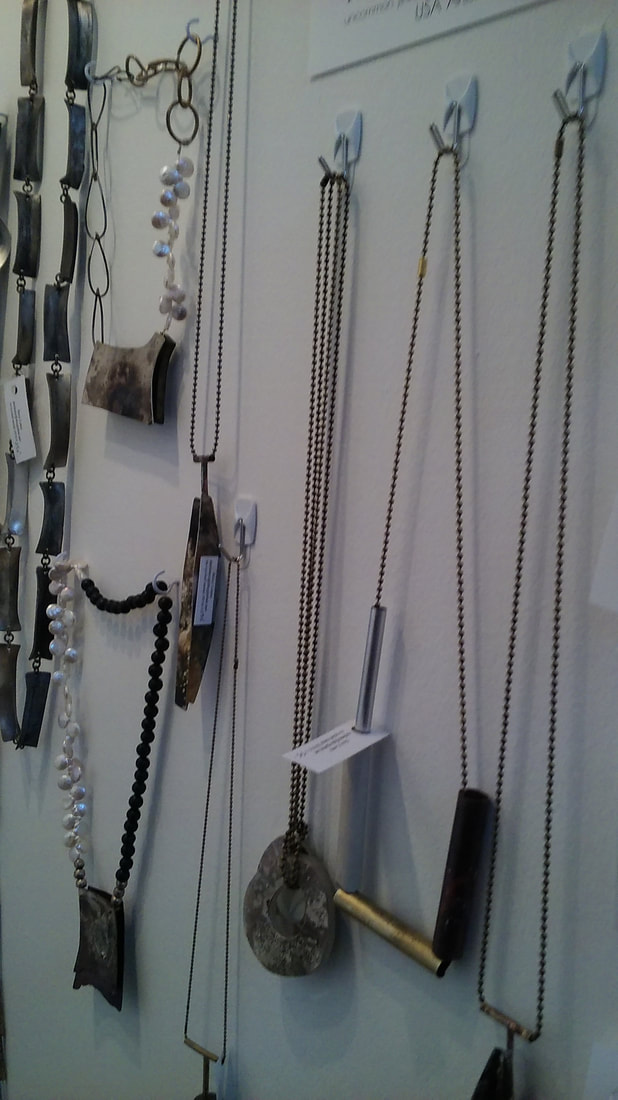 Meet the Artist video by HEC Media in St. Louis for the St Louis Art Fair
Click here.
​​
Yep! Here.
My work is made from re-purposed metals. I find silver plate trays, brass and copper at the thrift store, and then make jewelry from them. When I first started this, I did it because I could not afford silver, and, it was a bit intimidating. But, old silver plate trays were easy to come by, so I thought I would try using one.

Well, when I put the torch on that first tray, the silver layer went into orbit, it shriveled and bubbled up, and I thought this will never work. But, then, I realized I liked what I saw, my customers liked it also. Each metal reacts in a different way, depending on the underlying composition, and the amount of silver used to plate the metal.

Because I use metal that has a history, and holds mystery, the end result is always one-of-a-kind. I can try to hold a bit of control over the end result, but the metal ultimately decides what it will be, and it is always a surprise.

Some may ask, what is the difference between re-cycled, re-purposed metal, or  up cycled metal?
I am not sure there is a correct answer, but for me, re-cycled means that the product was sent to a facility that broke down the original material, and made "new" material. Re-purposed means that the material did not go through a process to be done over, it was used as is, but in a new way, you can still see the original material. The term I am currently using is "up cycled".  If a plastic bottle has to be melted down and made into a new plastic item, it has been re-cycled. If someone took the plastic bottles as they are, and re used them in a new way, they are re-purposed, when someone changes the bottle so you no longer see it as a plastic bottle, it is up cycled.

What is the difference between "silver-plat﻿e" and silver trays? A silver plate tray is made from brass, copper or sometimes steel or pot metal, then it is covered with a thin layer of silver to give it the appearance of silver, for people who can't afford or don't want to invest in sterling, a sterling silver tray is silver to the bone, and much more expensive.
﻿
Recently I have been using bits of PV﻿C pipe left broken in the street. After the PVC has been smoothed and buffed, it takes on a new beauty, it resembles bone, or ivory, but has its own mystique, and people seldom recognize it anymore. It takes courage for a woman to wear my jewelry, because strangers will stop her to get a closer look, and ask, "Where did you get that?". Is it a compliment, or curiosity? In any case, this jewelry is truly one-of-a-kind.

﻿How I get the patina. ﻿People often ask me how I get the patina on the metal. I use as few chemicals as possible. The major components are borax flux, and the torch. I use the torch over and over until I see what I like. If I think the piece needs to be put into pickle, I use a mix of water, white vinegar, and salt. Most important seems to be that I "hold my mouth right". It is serendipity how the jewelry turns out, and very unpredictable.

What to call this style. I have never known what kind of words to use to describe my style, sometimes I have used wabi-sabi, or deconstructed, or grunge, but lately I found a new word that I really should have known all about. Brutalistic. In any case, it is uncommon jewelry for independent women.

The process from start to finish, not showing the sawing, filing, hammering, shaping, riveting, torch, and most important,
​ "holding my mouth right".
I love patina no matter where I see it. This is the original wall in a display window of a store in downtown Jeffersonville IN. You may be able to see the original wallpaper they used. I don't know what this store was in its time, but I get the impression it was a very classy store once. The wall had been covered up, then torn down, and now they are making more changes, and soon the memory of the first store will be gone, to have new ones begin. 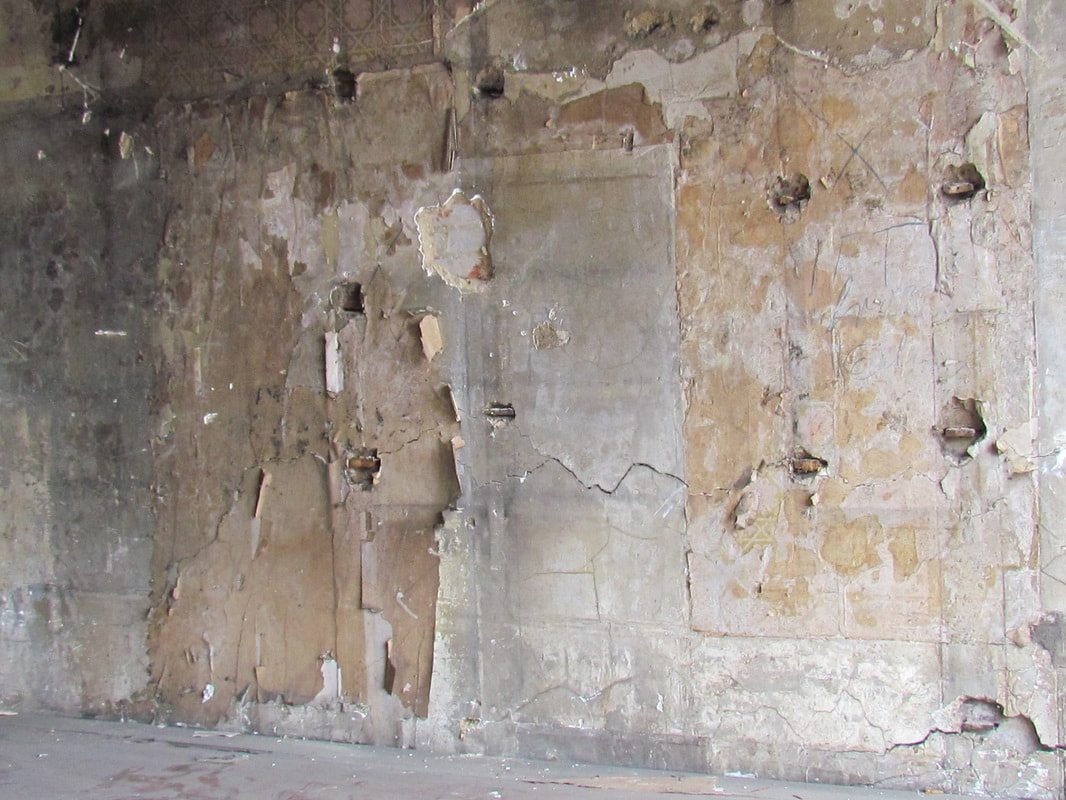 This is a wall in a former clothing shop in Jeffersonville, Indiana. The new owners were stripping the walls down to the original bones, and I was fortunate to have my camera with me to take a picture, before they made it all presentable again. Yes, I know, they couldn't leave it like this, but, I love it.